Once-troubled parrot invents game all her own - Dr. Marty Becker

Once-troubled parrot invents game all her own

I normally don’t publish guest posts, but when I read this moving story on Facebook, I had to reach out to its author, Emily Strong, and ask if we could share it here. It’s about a parrot who for unknown reasons suffered severely from fear, anxiety, and stress, who not only learned a different way […] 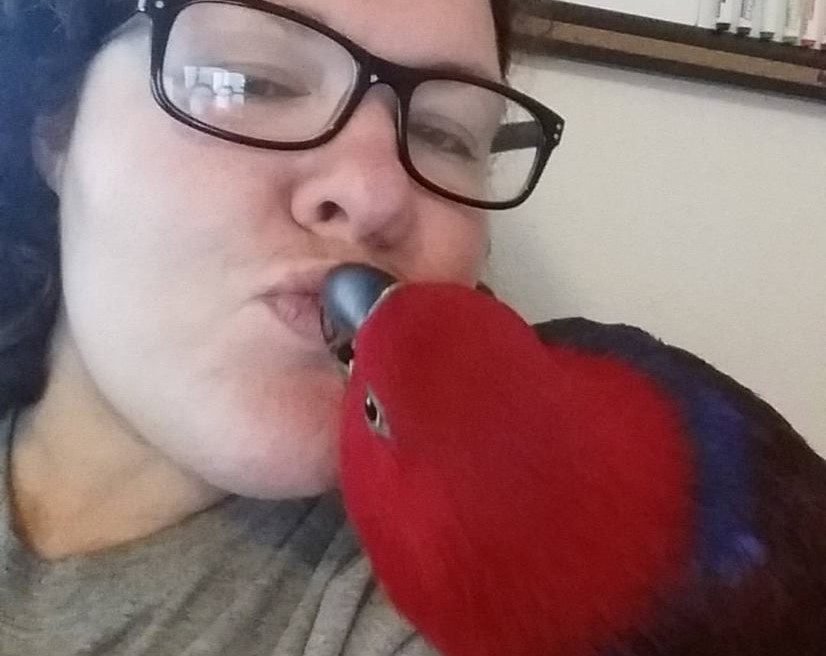 I normally don’t publish guest posts, but when I read this moving story on Facebook, I had to reach out to its author, Emily Strong, and ask if we could share it here. It’s about a parrot who for unknown reasons suffered severely from fear, anxiety, and stress, who not only learned a different way to live, but did something truly extraordinary. Thank you, Emily, for letting us share this story here.

My Eclectus parrot is the reason I’m a behavior consultant.

Cah’ya (pronounced “cha-HI-uh”), an Aru Eclectus hen, was given to me by an ethical breeder who was well known and respected in the avian community for his knowledge, skill, and commitment to his birds. He was also a friend and mentor of mine, so he reached out to me to see if I would be interested in taking her because she was an atypical baby.

“I don’t know what to do with her,” he told me, “There’s something wrong with her. If I sell her to a normal pet home she’ll end up getting bounced around homes, but it would be unethical for me to sell her to a breeder.”

Even though he socialized his babies extremely well, carefully bred for health and temperament, and fed his birds a varied, nutrient-rich diet, Cah’ya seemed terrified of everything and everyone. From a very young age she displayed functionless repetitive behaviors, called stereotypies; she was extremely sound and movement sensitive; and if you made eye contact she would throw herself on the ground and scream for hours on end.

Perplexingly, she also displayed the wing flipping and toe tapping behaviors that are usually a sign of an inappropriate diet in Eclectus parrots. After seeing both an avian veterinarian and a veterinary neurologist, neither of whom could find anything physically wrong with her, I decided to accept that she is different and take care of her as best as I could.

I had started volunteering in a shelter and at a vet clinic at a very young age and had spent my entire life working and volunteering with animals: as a veterinary technician, in an aviary, at a barn that did horse rescue, in wildlife rehab, and of course, also in shelters and with rescue groups. Through all that experience I realized that a deeper understanding of behavior was the crucial common thread that we were missing. I had for a while wanted to start learning more about behavior, but I didn’t have the confidence to take the plunge and do it.

But when I adopted Cah’ya and nothing I tried to do to help her worked, I realized that I had to learn more about behavior science if I wanted to help her. She is the reason I took my first course in Applied Behavior Analysis from Dr. Susan Friedman 11 years ago.

It took 18 months of hard work and tears and self-doubt and struggle, but Cah’ya finally started opening up to me: making eye contact, soliciting attention, soliciting affection, touching me; and then, eventually, climbing up onto me, letting me touch her, and so forth. After that we made rapid progress. Within a month or two, Cah’ya invented her first game:

She stands on my arm and slowly leans far over to one side. I am then supposed to lean to the opposite side. She waits for me to do so. Then she slowly leans over to the other side, and waits for me to reciprocate. I do, of course. She repeats this, but every once in a while she swoops in and boops me with the curve of her beak. If she boops me on the lips, she makes a kissy noise (and I do, too). If she boops me on the nose she says “boop!”–and of course I “boop!” back. I think she started doing this because when I was syringe training her and I would clean off her beak, I would say “boop!” when I cleaned her beak. Whatever the reason, the rules are clear and consistent.

She has since made up other games as well, but this is by far her favorite game, and the one she plays most frequently. I can usually tell when she wants to play the game because she will stand on my wrist and stare at me for several seconds. Then I’ll ask her, “Do you want to play your game?” She usually then commences with the leaning and we have a few minutes of leaning, kissing, and booping.

This has been our routine for almost a decade now, but a few days ago when I was in the bird room doing the birds’ morning routine, Cah’ya hopped on my shoulder and mumbled something in my ear, then she leaned over and looked me in the eye, expectantly.

I said, “What was that, Cah’ya? I didn’t understand you.”

She walked down to my wrist, looked me in the eye, and said loudly and clearly, “Boop game?”

You could have bowled me over with a feather. She named it the Boop Game. She asked for it, with words. With intention.

Of course the fact that many parrot species can name things, request things, create novel phrases, and communicate in all these ways using another species’ language is awe-inspiring and fascinating, but in that moment all I could think of was the little baby bird she used to be — afraid to make eye contact, afraid to touch or be touched, preoccupied with stereotypies, patently unhappy — and how far she has come.

When I first started learning the behavior sciences I was doing so to solve problems — and, certainly, a science-based training approach has definitely taught me how to do that. What I never anticipated or could have ever imagined is how profoundly the behavior sciences have impacted my relationship with the animals I work with. I never knew before how deep that connection could be, how clearly and thoroughly we could communicate, how wholly we could trust each other.

And I never dreamed Cah’ya would be a bird who could love affection, who could let me close to her even during her most hormonal nesty phases, who could want to play games with me, much less create games to play with me.

Now she’s the bird who asks to play her favorite game. By name. By the name that she gave it. The Boop Game.

Emily Strong is a certified behavior consultant who works with all species of companion animals. She has been working professionally with animals in a wide variety of capacities since 1990, but has been a behavior consultant since 2008. She owns and operates From Beaks To Barks, through which she works with clients around the world. She is also president and co-founder of First Train Home, a non-profit organization that helps shelters and rescue groups address behavior issues ethically, effectively, and efficiently.