A little girl is alive and well today thanks to her diabetic alert dog. When Rebecca Russell, a registered nurse from Cameron Park, Calif., first learned about diabetic alert dogs, it was just shortly after her 6-year-old daughter, Sage, had been diagnosed as diabetic. She began researching everything she could, only to come up short […] 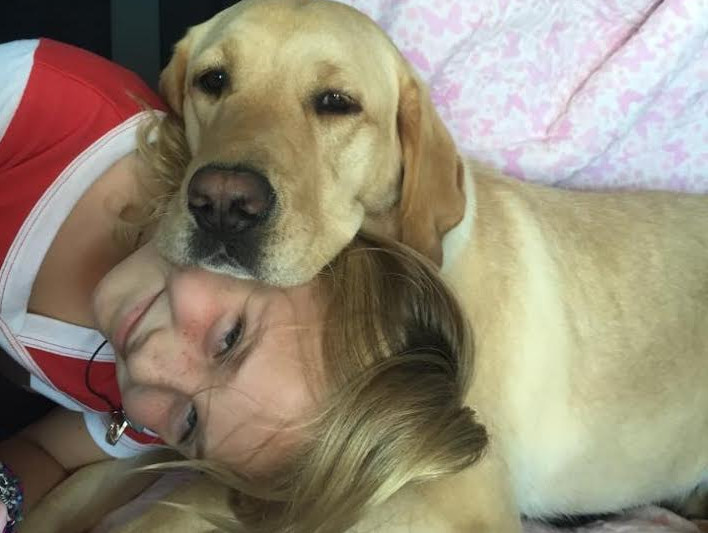 A little girl is alive and well today thanks to her diabetic alert dog.

When Rebecca Russell, a registered nurse from Cameron Park, Calif., first learned about diabetic alert dogs, it was just shortly after her 6-year-old daughter, Sage, had been diagnosed as diabetic. She began researching everything she could, only to come up short at the cost of the dogs from most sources.

“It was really heartbreaking to see the dogs were $25,000,” she said. “It’s so difficult and expensive to manage this disease process, and to feel you can’t afford one of these lifesaving dogs. Then I found the Early Alert Canines Facebook page.”

EAC charges only a $200 application fee and a $2,000 deposit that’s refunded when the team graduates or if the program isn’t able to find a dog for the diabetic. “I messaged them and said I’d like to know more,” Rebecca said. “Beth from EAC called right away. We talked for 45 minutes, and we were both crying!”

The program paired Sage with a dog named Remmy, a 2-year-old yellow Lab who originally started out being trained as a guide dog for the blind, then had a career change. Because Sage was too young to handle a service dog on her own, Rebecca was an integral part of the training process.

“Remmy went with us to the hotel, to dinner, to the pool,” she said. “We were always together, tied at the hip. We did some field trips to Target, and went out to lunch at In ‘N’ Out Burger, so the dogs and their new families could have real-life experiences with the trainers around.

“It was an extremely comfortable and knowledge-filled week. I walked away feeling pretty confident in being able to go home with this dog and have her do what she was trained to do for my daughter.”

In the beginning, they had to call in every alert and every blood sugar change Remmy missed. Then twice a week they’d call one of the trainers and go over every single log entry, so they could see was the dog performing to an 80 percent pass rate (the rate for graduation) within four weeks. To graduate, Remmy would also have to have done an alert in the car, an alert at nighttime, and regular all-over alerts. “That was really challenging, to have to log all that information when you’re scrambling at 2 AM to sleep and live your life, and you have to sit down and get out your spreadsheet!” Rebecca said.

Luckily, Remmy passed everything quickly, and Rebecca only had to contend with that process for a month. “EAC has always been there as support when we’ve called with questions,” she said. “You’re never alone. That family feeling is always there.”

What about Sage? The little girl, now 8, was extremely excited about Remmy from the very beginning. “The first week we had her, she would say, ‘Remmy saves my life every day. She watches over and protects me.’”

After four weeks of constant finger poking to check her sugar and fill in the required logs, Sage got pretty burned out. She’d even get annoyed when Remmy would alert, because it meant another poke. “Now that part is over, and we don’t have to do the extra checking, she loves to walk Remmy around again,” Rebecca said. “Out in public, it gives her confidence about her diabetes. She used to hate when people would say, ‘What’s that on your arm?’ about her sensors, but now Remmy is around, she’s confident. She loves to talk about her dog. Remmy is her guardian, and she loves to show her off!”

Having a diabetic alert dog didn’t only require some adjustments on Sage’s part, but on Rebecca’s as well. “The first week we had Remmy, before she really knew us and before we really knew her, we were up at Tahoe,” she said. “We went to dinner at someone’s house, and there were three young children Sage’s age and four other dogs.

“Everything was fine, Sage was beyond this little fence playing with dogs and kids on the lawn, I was up on the deck chatting. Suddenly Remmy stood up. I thought she just wanted to play, and kept saying, ‘Sit down, it’s okay.’

“Then she turned to me, stared, and pawed me. I wasn’t too concerned because I didn’t think there was any reason anything would be going on with Sage’s blood sugar, but I had one of the kids bring her to me. And when I checked her sugar, it was 34! And Sage had felt nothing!”

Had Remmy not alerted so persistently, given the isolated area they were in, Rebecca said she wasn’t sure they’d have had time to get Sage the help she needed. “It could have been a bad situation, but Remmy knew her job, even with Sage beyond a fence, other dogs and people and food around, and me ignoring her, she knew her job.

“I thought it wasn’t that big a deal, and I was completely wrong. Now I know not to ever ignore the dog, because I’ve learned whenever Remmy is anxious, it’s always because of Sage’s levels.”

One time, the family was visiting Rebecca’s father, an uncontrolled type 2 diabetic. “Remmy was adamantly alerting, but I checked Sage and she was fine. Then I checked my dad’s blood sugar, and it was sky high! It turns out Remmy alerts to him, too, because she sees him as part of the family.”

Having Remmy has changed life for Sage and her family forever. “We were at Costco one Sunday, and she was walking Remmy down the aisle,” Rebecca said. “Everyone was getting out of her way, and Sage had her chin up and shoulders back. And that’s wonderful, because diabetes can really get kids down. I felt like nothing could touch her.”

Service dogs shouldn’t be available only to the wealthy. Early Alert Canines is able to help families like Sage’s only thanks to donations from people just like you. Can you give today, and help provide a diabetic alert dog to someone who needs it?