How one young woman learned to trust her life to the paws of a dog - Dr. Marty Becker 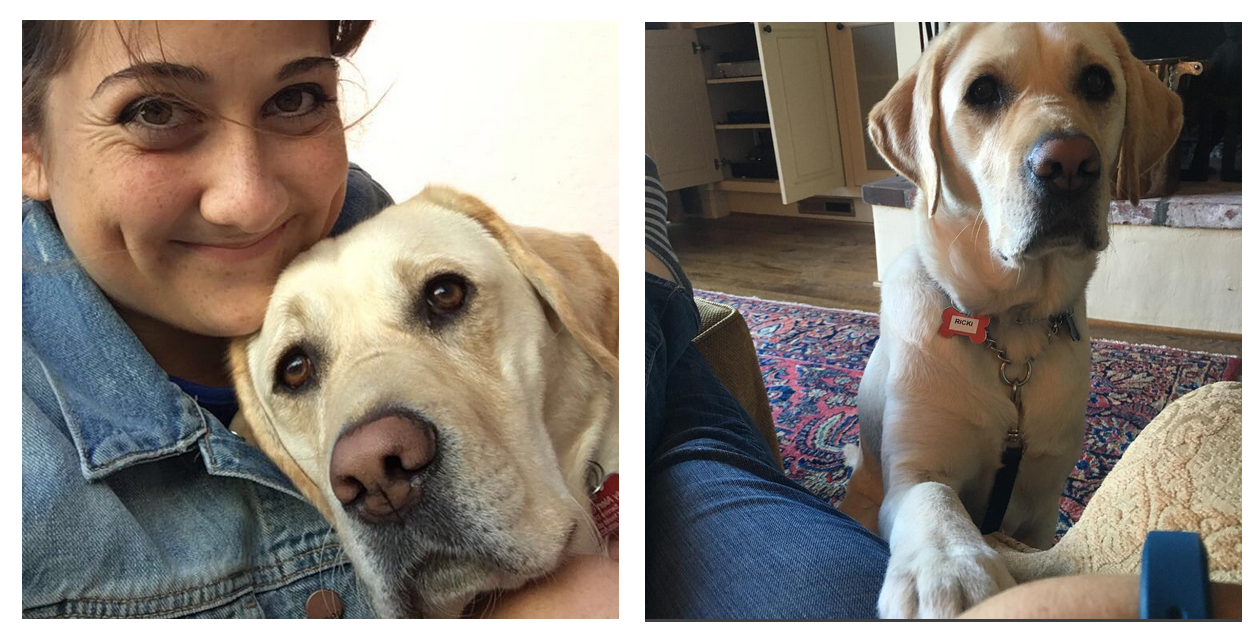 Just one month after a dog named Ricki came into Lauren Burke’s life, the young woman nearly died. Thanks to Ricki, she didn’t.

Ricki, a 2-year-old yellow Lab, isn’t only a companion. She’s a specially trained diabetic alert dog, trained by Early Alert Canines (EAC). Lauren is a 22 year old living in Oakland, Calif., who was diagnosed with diabetes at the age of 12.

“My endocrinologist first told me about diabetic alert dogs when I was in high school,” she said. “That planted the seed, and for years I knew I wanted one of these dogs. I started looking into it in college, but when I first began living alone, I knew it was time.”

Living alone was a big deal, because there had been a few middle of the night low blood sugar incidents where Lauren didn’t wake up until her electronic blood sugar sensor stopped just vibrating and started shrieking. “That could have ended really poorly, so I thought I’d better do something about it,” Lauren said.

She applied for a dog from EAC in spring of 2015, and began the series of blood sugar logs they require. In the summer Lauren started volunteering for them as well. Then, a year later, she came in to learn how she and her new canine partner would to work together. After training, she took Ricki home.

“It was awesome,” Lauren said of that early bonding experience. “It’s still awesome. There are times you don’t even realize, you feel fine, and she starts pawing at you, and you check your sugar and it’s 400, or it’s 100 and falling.”

A month after Ricki came to live with Lauren in her 250-square foot apartment, Lauren got a cold and slept around the clock. “When you’re sick, your blood sugars are all over the place, and you’re so exhausted you don’t even feel it,” she said. “Ricki woke me up from my nap sitting with her face on the edge of my bed, and would not let me go back to sleep until I checked my blood sugar — and it was 50 and falling. I like to think I would have eventually woken up, but she definitely saved me that time.”

Lauren and Ricki trained together for two weeks, and one of the most important lessons they taught her was that every single time the dog alerts, you give the dog a treat and test your blood sugar – “No matter how much your finger hurts,” laughed Lauren. The training also covered issues of access, which is guaranteed to service dog teams under the Americans with Disabilities Act. “There’s one family-owned restaurant we go to,” Lauren said. “The waitress is allergic, or maybe just afraid, and always asks me to leave Ricki outside. I tell her no, and she asks someone else to wait on me.

“Fortunately, Ricki is so cute and so well-behaved that people look at her and say, when they find out she’s only 2, ‘How can I get a dog like that?’”

Lauren graduated from college last spring and hasn’t found a job yet. “Before I got Ricki, I might have just laid in bed and watched Netflix,” she said. “Now, I get up, and go out with the dog. She’s been a motivation because I need to make sure I eat, and she eats, and that we do something together.”

Ricki’s training isn’t over yet, either. “Her alerting is at 93 percent accuracy, but there are still little things we’re working on,” Lauren said. “Her sitting there staring at me is not going to be enough when I’m doing something intensely, or driving. I don’t want her jumping up into the front seat, but sitting there staring just isn’t effective.”

Lauren explained that some dogs paw, and then bark if the pawing is ignored. “Ricki is a really quiet dog,” she said. “Sometimes she gives a little woof when someone’s at the door, or a soft growl when she’s playing with other dogs. She’s not nearly as vocal as some other dogs.”

Lauren took Ricki to visit her grandparents, and her grandfather was less than enthusiastic about the pairing. “He raked me over the coals, telling me no one would ever hire me, they’d just look at an equally qualified candidate who doesn’t have a dog,” she said.

Not only that, but he didn’t trust the dog to keep his granddaughter safe. “He said, ‘How can you trust your life and health to a dog? It’s irresponsible. You’re so dumb for doing this.’”

The more Lauren spoke with other people with diabetic alert canines, and the more she worked with Ricki, however, the more she realized he was wrong. “This dog is better than the technology. She can pick up falling blood glucose 15 minutes before my meter!

“I care enough about myself, my life, my longevity, and my long-term health that I don’t see it as ‘trusting my health to the paws of a dog,’ but a having a very valuable tool in my diabetes arsenal.”

Today is World Diabetes Day. Because diabetic alert dogs shouldn’t only be for wealthy people, Early Alert Canines provides their dogs to diabetics for a $200 application fee, compared to the $25,000 charged by some organizations. They can do this only because of the generosity of people just like you. Can you give today, and help provide a diabetes alert dog for someone who needs one?