Bella loses her family: The downside of our shelter Christmas - Dr. Marty Becker

Bella loses her family: The downside of our shelter Christmas

The second annual ‚ÄúChristmas Pawty‚Äù at three Northern Idaho shelters was a day of incredible ups, not the least for the company I had with my wife (Teresa), daughter (Mikkel), granddaughter (Reagan) and dozens of other dedicated, sincere, warm, energetic, loyal and most of all loving women (listed first because they dominated the ranks), men […] 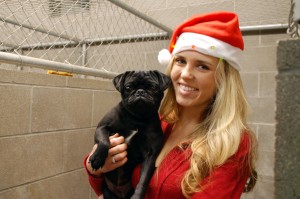 The second annual ‚ÄúChristmas Pawty‚Äù at three Northern Idaho shelters was a day of incredible ups, not the least for the company I had with my wife (Teresa), daughter (Mikkel), granddaughter (Reagan) and dozens of other dedicated, sincere, warm, energetic, loyal and most of all loving women (listed first because they dominated the ranks), men and children who love pets like family showing up to participate. Every one of the approximately 280 dogs and 200 cats at the shelters received a toy, a treat, some love, spoken words and silent prayers telling them we were going to redouble our efforts to move them from the cage at the shelter to the couch at somebody‚Äôs home.

It was seven straight hours of being mostly on my knees in front of and inside of cages squirting Kong peanut butter right into dogs’ mouths (it was like they were nursing on a baby bottle), giving the dogs poker chip slices of Natural Balance lamb rolls and cats Halo freeze dried chicken (both are like crack), playing tug of war with some retrievers and Cirque du Soleil aerials with kittens by dangling catnip toys from the sides and ceilings of the cages. I finally took a break to eat, and while sitting alone in a restaurant by the Kootenai River in my hometown of Bonners Ferry, Idaho, I should have been buoyed up by all the ‚Äúups‚Äù I‚Äôd been part of, but I was troubled by thoughts of beautiful dog I‚Äôd seen that day,

A little after noon, I was inside the lobby of the Kootenai Human Society in Coeur d‚Äô Alene. The organized, energetic, dedicated, loving shelter manager, Rondi Renaldo, was running around as if her hair was on fire. The crew from the local ABC affiliate was there to report on the event, as were a reporter and photographer from the Coeur d‚Äô Alene Press. Perhaps a dozen volunteers already had on lighted Santa hats and flashing reindeer antlers and were busy organizing the toys and treats in the big boxes in the lobby for our loving assault to bring cheer to those precious pets in the cages.

The day-to-day business of the shelter was going on as well.

A well-dressed young man came in in with a beautiful black Pug in his arms. Because our daughter, Mikkel, has two Pugs, Willy and Bruce, we babysit frequently. And because we‚Äôve never met a Pug we haven‚Äôt thought was beautiful and precious, we went up to introduce ourselves and get and give some ‚ÄúPug love.‚Äù

‚ÄúAre you here to volunteer for the Christmas Pawty?‚Äù I asked, to which he replied curtly, ‚ÄúNo.‚Äù Then Teresa said, ‚ÄúAh, your Pug is beautiful!‚Äù and stroked her head (because of the way he was holding the dog we could see the gender). He never responded to Teresa but just turned away.

After visiting dogs throughout the facility we came to the last ward. In the second run on the right, sitting beside her nice bed, was the little black Pug we‚Äôd seen in the lobby. Her head was down and she was shivering with fright.

Shocked, I asked Rondi what had happened, and she said the man had surrendered the dog. saying it was just too hard to take care of the pet now that they had a baby. At about four-years of age, this dog had been subjected to a reverse migration of what we were attempting to get for others that day: The Pug went from the ‚Äúcouch at a home to a cage at the shelter.‚Äù

Mikkel took the dog out of the cage, embraced and kissed her, and we asked her name. It was Bella. She was so scared that she wouldn‚Äôt even take a single bite of lamb roll or lick of peanut butter. She just wanted her family to come back and get her and take her home, but that wasn‚Äôt going to happen.

I do understand how in some circumstances families simply can‚Äôt keep a pet (have lost their home, or their job, or both), but I just had a feeling ‚Äì we veterinarians see a lot, after all ‚Äì that Bella was dropped off not because her owners couldn‚Äôt care for her, but because they didn‚Äôt want to, anymore.

That‚Äôs why I was so sad. Several pets were adopted that day, including the Langley the Labrador who‚Äôd been at the Kootenai Humane Society for almost a year. But I couldn‚Äôt Bella get out of my mind. Soon Teresa joined me at the restaurant, and the first thing she mentioned was Bella. Mikkel texted us about Bella. She had hit our hearts full on.

Last night I had trouble sleeping because of thinking about Bella in the cage. Without a family who loved her. But I got up this morning full of hope, because I know there‚Äôs a lucky family with hearts and home for a precious black Pug.

Is your family that family? Let‚Äôs start with her, then move onto finding homes for the other pets who need much more than one extra special day per year, not just in my local shelters but in yours, too. We can get it done!

Update: From our friends at the Kootenai Humane Society: “Bella is already on her way to her new home where she will have another pug as company. She is a very sweet dog and is going to a good home.” Best news ever!