When I saw the look in the eyes of Lem, a senior German Shepherd left by his owner at a shelter in Southern California and who was almost out of time, I knew I had to try to help him. I posted his story and photo here on my blog as well as to my […] 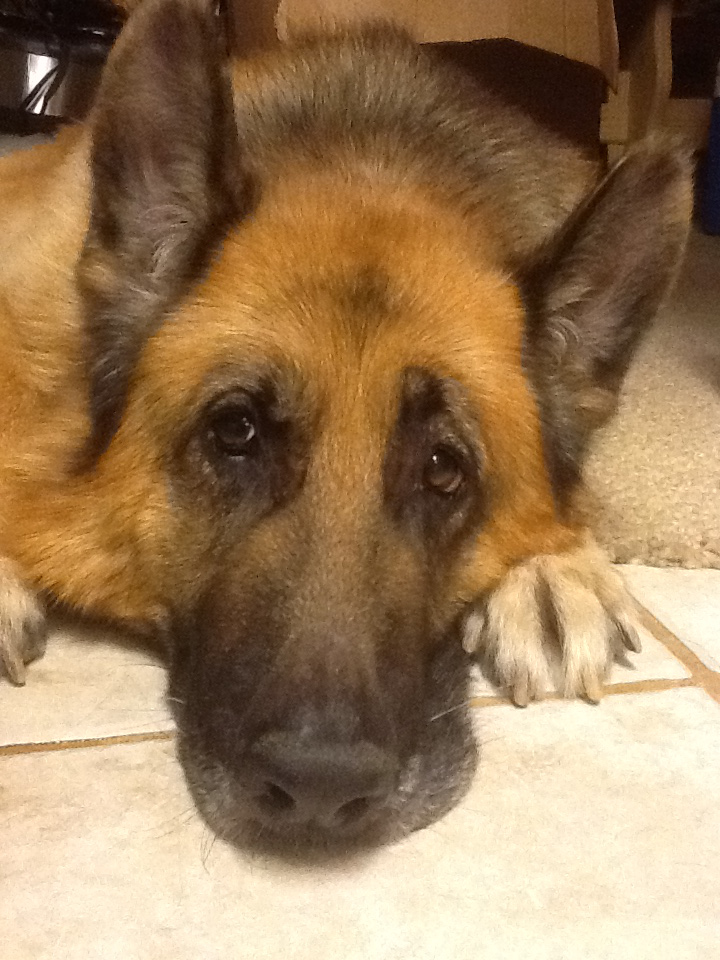 When I saw the look in the eyes of Lem, a senior German Shepherd left by his owner at a shelter in Southern California and who was almost out of time, I knew I had to try to help him. I posted his story and photo here on my blog as well as to my Facebook page, and people immediately responded. It was incredible.

Later that day, I heard in the comments on his post that a veterinarian had adopted him. Although I reached out to her, I was unable to confirm it. Well, it’s been confirmed now! Dr. Susan Garlinghouse adopted him literally right out of the shelter’s euthanasia room, and his new name is Caesar!

She gave me permission to share her email so you can read the incredible story of how he came to be with her, and how he’s doing now… it gave me chills and tears in my eyes at the same time! Here it is:

I am so sorry for not having responded to you sooner—somehow your email got dropped into the wrong email folder and I just now found it.

Yes, I adopted Lem, now renamed Caesar.  He’s doing terrific, what a great dog he’s turning out to be.  It was so strange when I called the shelter to ask about him after a friend had forwarded your website article to me.  The shelter clerk initially said that he was “out for assessment, call back in a few days”, which, knowing he was already out of time, made no sense to me.

I had a friend call down as well and they said he was available and in his kennel, but no, they wouldn’t say much more than that.  I decided the only way to get something accurate was to physically go to the shelter and sign a Commitment to Adopt if he truly was out at a vet’s office for some reason.

When I got there, they said no, he wasn’t out for assessment, he was in the kennel run.  Nope, his cage card was there, but no dog.  Back to the front desk.  Maybe he got moved to another run in the kennels, go look in all of them (great, a tour of a hundred dogs, also saying “ME! ME! PICK ME!”.  Ack.)  No German Shepherd.  Back to the front.  Maybe he’s over in the shelter vet clinic.  Nope.  Not there.

By now, I was getting a bit agitated, wondering how is it that they cannot even keep tabs on this dog, let alone what his status is.  Finally, they came back and said that they had found him in “a non-public area of the facility”, but now he was back in the kennel run.  I have a colleague who used to be a county shelter vet and you and I both know which room the “non-public part of the facility” is used for.  By now, it was around 4 p.m. and I’m pretty sure animals aren’t kept overnight in that area.

Anyway, I had the poor guy out of there like a shot.  He was pretty bewildered, absolutely did not want to get into the car (can’t blame him, his last car ride didn’t end so well for him) and he was thin, dirty, matted with dead hair and stank something awful.

Over the next few days, we got him bathed, all the dead hair brushed out, and found seven or eight untreated abscessed, maggoty bite wounds on his back and throat—who knows what the story is with those.  Cleaned up, onto antibiotics for awhile, they’ve healed up well.  He had some worrisome lower respiratory sounds and not surprisingly some kennel cough, but that’s resolved with antibiotics as well.

He has some mild hip issues, but I don’t think anything that can’t be managed well with omega-3s and Adequan.  He’s gotten eight injections of Adequan so far and it’s made a world of difference.  His appetite is good and he’s back to a more normal weight, although I’m keeping him around a body condition score of 4.5 to help with the orthopedic issues.  It seems he has some mild food allergies, but is doing better on a grain-free, salmon protein diet with some added fish and flax oil.

It took him a little while to come out of his shell, but he’s rapidly becoming an incredibly affectionate and devoted dog.  Absolutely gentle with people (though a fearsome bark), children, horses, and my other dogs and the cat.  He plays like a puppy bounding around pouncing on and shaking his toys and loves to play fetch.  He’s progressed from tolerating being handled, to enjoying it, and now asking for it with a big happy grin and wagging tail.  He’s never more than a few feet away from me while I’m working in the house.  He’s housebroken, doesn’t destroy things and has excellent house manners—basically a joy to be around.  It’s very, very good to see him blooming and regaining his confidence and joie de vivre.

He still gets very frightened and worried being asked if he wants to go for a ride in the car, but we’re working on getting him over that with time.  The only chronic issue I’m seeing is that his hearing is pretty poor.  He had a really nasty case of otitis externa when I brought him home, and it might have progressed to otitis media as well.  I’ve flushed his ears several times, did a thorough round of infusion and his canals and TM appear to be okay, but still only about 30% of normal hearing.  We can live with it.  I might take him down to a neurologist to have him checked out at some point, but the discretionary budget has mostly been going towards Adequan right now.

Here’s the last odd thing—he knows how to “stack” as would a show dog, gaits out on a leash like a show dog—and he understands a few basic German commands.  I wouldn’t say he’s fully Schutzhund trained, but someone, somewhere put a lot of socializing and training onto this dog.  So how did he slip through the cracks so badly as to be minutes away from euthanasia?  The shelter said that he was an owner-surrender, that they said they didn’t have time for him.  That much is certainly evident, although there has to be more, but all I can do is conjecture.

Anyway, this is probably far more than you needed to know, but here you have it anyway.  He’s doing just great and yes, this is certainly his forever home.  My husband and I are moving up to Northern California next month and the dogs will have seven fenced acres to run on.

Thank you very much for noticing this awesome boy and using your resources to publicize his situation and get him pulled him back from the edge.  He is absolutely worth the effort and is firmly entrenched as a beloved and permanent member of our family.