What to do about dogs and chocolate - Dr. Marty Becker

What to do about dogs and chocolate

Who doesn’t love chocolate? It’s the stuff of celebrations, holidays and romance. It’s filled with feel-good chemicals, and there’s even evidence that it’s good for our health. Dogs love chocolate as much as we do, based on the number of stories I’ve heard about canines who crave the sweet stuff. Just about every week, I […] 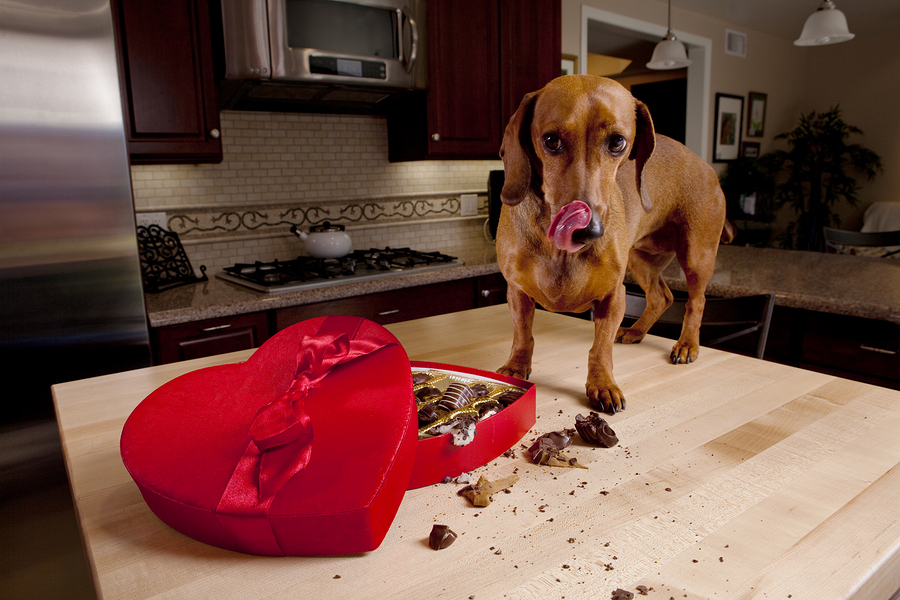 Who doesn’t love chocolate? It’s the stuff of celebrations, holidays and romance. It’s filled with feel-good chemicals, and there’s even evidence that it’s good for our health.

Dogs love chocolate as much as we do, based on the number of stories I’ve heard about canines who crave the sweet stuff. Just about every week, I see or hear from clients whose dogs have gotten into a box of designer chocolates or a bag of Snickers bars or M&Ms. I even remember one Christmas when my brother Bobby’s late Yorkie, Buddy, ate an entire 1-pound box of Godiva chocolates.

But while dogs who OD on chocolate might get the same flavor enjoyment from it that we do, it’s not so good for their health. Chocolate contains both caffeine and a substance called theobromine. Both are plant alkaloids, mildly stimulating to humans, but toxic to dogs, who aren’t able to process theobromine as efficiently as humans.

Now, I hear stories all the time about dogs who suffer no ill effects after eating a whole batch of homemade fudge, a bag of Hershey’s kisses, a chocolate muffin or cookies dipped in dark chocolate. That’s because chocolate’s toxic effects — known as chocolate toxicosis — vary depending on the size of the dog, the amount and type of chocolate eaten, and individual sensitivity.

Small dogs, like 6-pound Buddy, are at greater risk than the typical 100-pound Labrador retriever. And dogs who eat chocolate candy adulterated with lots of sugar are usually less at risk than those sophisticated canines who ingest high-quality dark chocolate.

“The darker and more bitter the chocolate, the more toxic it is,” says Justine Lee, DVM, who’s double board-certified in toxicology and emergency and critical-care medicine. “White and milk chocolate have less theobromine, the poisonous chemical, compared to baking chocolate.”

That doesn’t mean that milk chocolate is necessarily safe. One ounce of milk chocolate per pound of body weight is a potentially lethal dose in dogs.

Usually, when dogs down too much chocolate, they vomit it back up. If they ate a 2-pound bag of M&Ms, you might come home to rainbow-colored vomit on your carpet.

Sometimes the evidence comes out the other end. Barbara Davis of Corona, California, had an English springer spaniel with a chocolate fetish.

“One time she consumed an entire sack of Kraft Fudgies, including the little gold plastic wrappers,” Davis says. “At that time I was living in Manhattan, and it raised quite a few eyebrows as people observed my dog pooping gold in the curb on 52nd Street.”

If they’re going to have a problem, most dogs start to vomit, have diarrhea or become unusually thirsty within six to 12 hours of ingesting chocolate. Restlessness and a distended abdomen are also signs. More severe side effects such as seizures, a racing heart (tachycardia) and high or low blood pressure can also occur.

Death by chocolate isn’t just the name of a dessert. Dogs who are highly sensitive to theobromine or who ingest the more toxic dark forms of chocolate, such as cocoa powder or unsweetened baking chocolate, can die from cardiac arrhythmias, hyperthermia or respiratory failure.

Another factor is the possible presence of xylitol, a sugar alcohol, in some chocolate products. It’s highly toxic to dogs and may be of more concern than the chocolate itself.

My brother’s dog Buddy indeed needed a trip to the veterinary clinic, but I’m happy to report that he survived the incident.

When in doubt, Dr. Lee advises, contact the ASPCA Animal Poison Control Center (888-426-4435) or other pet poison hotline for life-saving advice. They can advise whether or not it’s a poisoning concern.