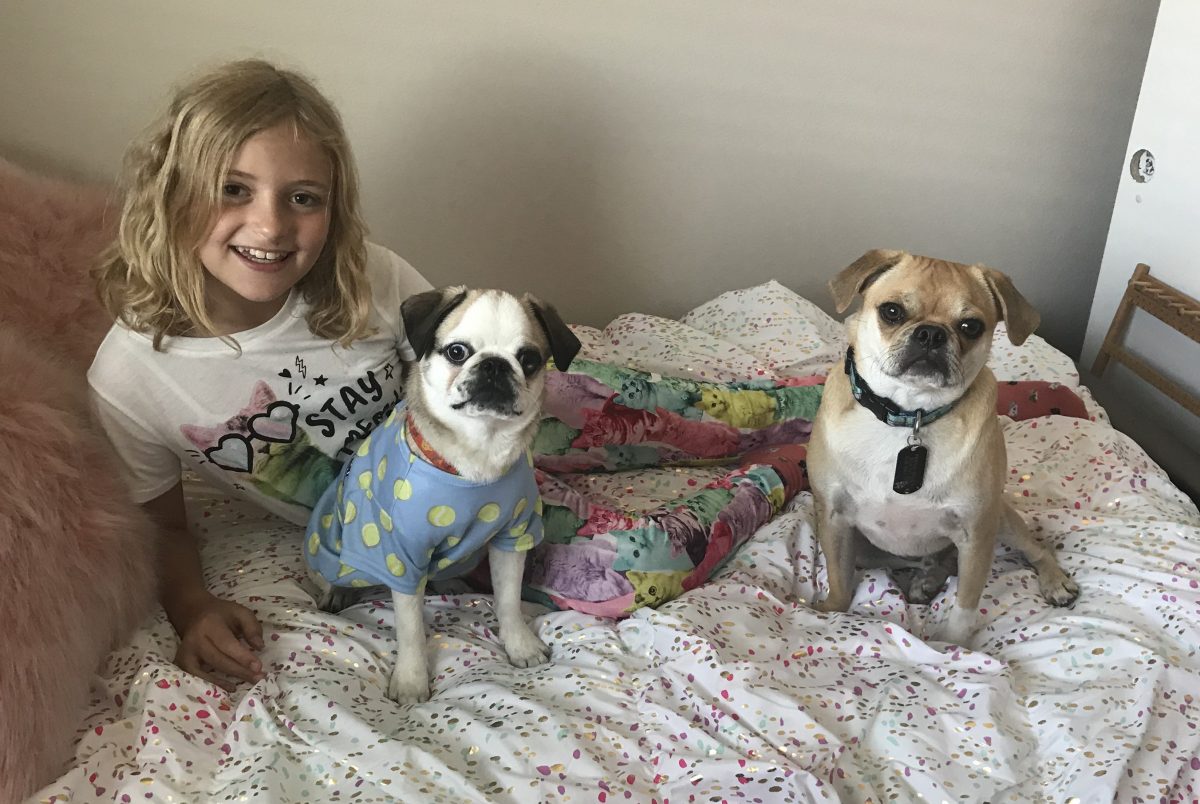 We have a new Becker family member! Our daughter, Mikkel Becker, writes here about how Otis joined the family.

Otis’ journey to our Spokane home and the embrace of his new little girl started out four homes ago on the opposite side of the country, New York, then into the care of Arizona Pug Adoption and Rescue. Whether it’s moving from home to home when certain living situations don’t work out well, as was the case for our dearly beloved Otis, so too perfectly imperfect human relationships sometimes change the course of the life we thought we’d have. For me, that’s the reality of where I’m now at: moving to Spokane and making the change for Reagan, and for myself, to leave an ill-fitting relationship and journey to a better relationship with myself, with God, and the people who Reagan and I want to be.

The addition of Otis has furthered the circle of unconditional love that Reagan and I feel surrounded in as we begin the transition to a new life together in Spokane. Unconditional love for my dog, and for myself and Reagan, is what made me make the move in the first place, as I was forced to choose between the love of a given man and the love of my dog. For anyone who has really known me, you don’t even need to know the type of crazy “in love” I am with my puggle, Indiana Bones, to know that the choice was a foregone conclusion. I’ll always choose the love of my dog over the love of a man, not because I rank one love higher than another, but because no one who truly loved me would want me to violate my truest self. After all, the love of animals is at my core, who I am made and meant to be by my very nature as a human being- it’s the center of who I’ve always been since my earliest memories as a little girl.

Thus, the “it’s me or the dog” dilemma not only moved us physically from the west to the east side of Washington State, but it’s also moved me to push into a new season of bigger, bolder, and better; of allowing myself, and giving Reagan the freedom to allow herself, to become the people we were always meant to be: fully free, uninhibited, and fully loved just as we are, for the preciously unique, vicariously alive, and richly flavored women we’ve always been, and now have the permission and space to fully be.

Such a story isn’t just mine, or Reagan’s, but it’s ultimately the story of Otis as well. When a dog is rescued by a loving home they’re more than re-homed; they’re also given a chance at redemption and finally having permission and space to embrace and become the dog they were always meant to be in the first place. And sure, both dogs and people can make many pitstops, meet wrong turns, and experience serious breakdowns along the way before finding that place of freedom and space for both their body and soul. But once you find that place where you finally have space to be you, that’s a destination that’s finally the one you want to call home.

That’s how it happened for us coming to Spokane, and ultimately, for Reagan finding her little rescue dog Otis; the sweet little soul she’d envisioned joining our family all along. Otis, also known as a hurricane on four legs, is a whirlwind of mischievous fun and fiery spirit, combined with a cuddle storm of kisses and snuggles.

Our little man had been in transition for months, moving from home to home, his 12 pounds being quite the handful of fierce tenacity and energetic exuberance that was a little too much for his prior adoptive homes. Thus, after plane rides and car trips, Otis found himself at APARN, where the founder and his new foster mom, Terri, took it upon herself to hold onto him until she found just the right space for his sweet, spunky spirit.

Right around this time, Reagan and I had talked more in depth about our mutual desire to add another four-legged love into our lives. Most specifically, Reagan asked for a canine companion who she could call her very own. And while I’d looked numerous times online at favorite sites like petfinder.com, I’d yet to find just the right dog who needed us and who we felt a heart connection to. But after my more conversation with Reagan, I realized that even though we’d only recently loved into our Spokane Valley apartment home, another move we needed to make in our lives was giving the open door to the right dog when the right time came.

Thus, I reached out to my friend Terri at APARN with the simple request to keep a lookout for the right dog who was snuggly and sweet for Reagan while also being playful and energetic to keep up with our rambunctious pug, Indiana Bones. And, along with other specific needs for the current setup, I expected it would likely be months before just the right rescue pug came to her door, so I left it at that.

But minutes later I received an email. My heart immediately leaped when I saw the photo of the little pug mix I knew was meant to be the one, a little pup who stole my heart with his big-eyed, pug mug face. Reagan, too, upon seeing his little face, knew he was ours and would be with us to stay. But first we had to get him here! And, that’s when I realized that due to different passing medical issues that Otis faced and limitations I was met with as a single mom with Reagan starting school in our new place, it truly takes a village of people to bring the right dog to the right place to his right person, to start that journey of love between dog and girl together.

I realized in adopting Otis that it’s easy to be frustrated with the people who have failed the dog along the way; not meeting important needs that include their socialization, training, or just the general sense of commitment and providing a secure, forever space. But what I’ve chosen to dwell on, and the truth that I’ve found, are all the people who have loved Otis before us along the way, from his foster mom, to the rescue volunteer who flew from Arizona to Washington to take Otis to us, to even the home before his foster, who realized her inability to fully meet the needs of the overly-exuberant dog who needed far more than she was able to give. Because of those decisions, both the good and the bad, Otis came to us.

I’m of the belief that God works all things out for the good. While I certainly didn’t see myself being 32, twice-divorced, and a single mom, I also didn’t know the freedom and fulfillment I’d find in such a space. It’s pretty amazing how God’s ways are higher than our ways, and His thoughts higher than our thoughts. Here I am, in the place you wouldn’t think I’d want to be, but I’m the happiest I’ve ever been. Truly. And I think it all comes down to hardship bringing me closer to the core of what makes me, me, drawing me nearer to the things that make my heart happy and full, including the animals my soul has always loved.

I feel like a new mom, overly-exhausted and overworked with all of the craziness of having a new dog, and dealing with some of his imperfect habits like not yet being house trained and wanting to react to anything he deems not quite right (this includes me looking in the mirror or putting on makeup, new dogs, and unfamiliar people [especially men!]. and wanting to steal anything he deems even halfway edible. But more than the overwhelming work ahead I feel the overwhelming joy of being able to share our love with this new sweet soul who is here with us to stay and who makes our home full whole.

I believe that a piece of God Himself is woven into the very hairs and hearts of our beloved dogs. After all, God is love, and if there’s one thing dogs do best, it’s expressing the gift of unconditional love. And, more than mere coincidence, I believe the right dogs, at the right times, happen to find their way into the hearts and homes of the people who need them the most.

In the midst of cleaning up pet mess during the initial stress of needing to teach Otis things, like retraining from a litterbox to instead go outdoors, and in teaching him that new people and dogs are friends not foes, I’m finding that the beautiful mess of the moment, the perfectly imperfect moment, is full of those moments that will both today and someday matter most.