A lifetime reflected in the dogs I’ve loved

As Christmas draws near and the year comes to an end, I find myself drawn back in time to all the dogs who have defined and enriched my life. I was born in Twin Falls, Idaho, where they grow the famous Idaho potatoes,  and grew up on a small family farm. My very first memory […] 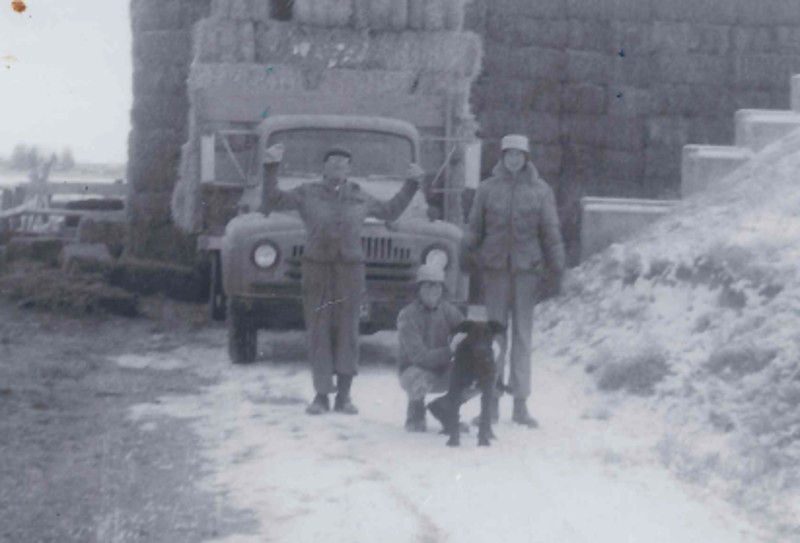 As Christmas draws near and the year comes to an end, I find myself drawn back in time to all the dogs who have defined and enriched my life.

I was born in Twin Falls, Idaho, where they grow the famous Idaho potatoes,  and grew up on a small family farm. My very first memory is as a toddler walking beside a Australian Shepherd named Shep, using her as a slow-moving set of training wheels. We had Shep until I was about eight years old, and then we got Skeeter the Toy Manchester Terrier, who was the first house dog we had, and the first dog allowed to sit in her own chair at the kitchen table and sleep in my bed at night.

Tragically, Skeeter was mauled by a much bigger dog and killed when I was about twelve.

It wasn’t long before my brother, Bobby, and I found out about a litter of Labrador Retriever puppies and came home with two brothers. Bobby’s was a light colored Lab he called Sam, whereas mine was a black Lab I named Luke after Cool Hand Luke.

Luke was my shadow. My loving, loyal, tail-wagging friend through all of the tough times in junior high and high school, on the farm, even after I left home for college. I must admit, I was always more excited to come home and see Luke than anyone else, including my parents!

I met the love of my life, my beloved wife, Teresa, at college in 1978 when I was a 24-year-old veterinary student. The next year we bought our first dog, an incredible salt-n-pepper Miniature Schnauzer we called Bode after a favorite teacher of Teresa’s, Mr. Bode. Bode was literally and figuratively our first child, and was there for the birth of our first human child, Mikkel, in 1985.

When Mikkel was about five years old, she used money she’d been saving for a few years and bought a Wirehaired Fox Terrier she named Scooter. This was the same year our son, Lex, was born. Scooter was our sole family dog for almost 14 years. Lex wanted a bigger dog to roughhouse with, so one time when I was on a trip, Teresa and Lex went to a great local breeder and brought home a super-loving Golden Retriever we called Shakira (after the stunning Columbian singer with the beautiful golden tresses).

Teresa’s dad died in 2002, and it hit her really hard. We didn’t have a small house dog for a year, because Teresa didn’t have the heart for one, as she was grieving over the loss of both her dad, Jim, and Scooter. But in one of those twists of fate, we found out about a litter of canine cocktails needing homes, and Teresa came out of the darkness in about a day after we brought Quixote home.

That was 2003, and Mikkel was off to college and Lex entered high school. About two years later, Mikkel surprised us with a wonderful young female canine-cocktail named Adora, who she found at a PetsMart adoption event. A Pomeranian/Shar Pei/Cairn Terrier, she was the same size and color as Quixote, and they were instant buddies. We changed her name from Adora to another “Q” name, Quora.

After both kids were out of the home (Mikkel married and Lex in college), I felt love at first sight when I first met an incredible Lab/Pit mix at a Santa Paws event at our local Second Chance shelter. Her name was Gracie and I kept it, adding only one word to make it Amazing Gracie.

Teresa and I both turned 60 in the past year. Traveling over 75 percent of the time as part of a mission to create Fear Free veterinary visits, we most certainly weren’t looking for a fifth dog. We also considered Mikkel’s two Pugs, Bruce and Willy, as our Grand-Dogs.

But God had a different plan. After I diagnosed and treated a litter of puppies at North Idaho Animal Hospital with deadly distemper, three were so sick we paid to have them sent to the veterinary school at Washington State University. Two didn’t make it, but we followed and prayed for two-pound Sam to survive, and he did! Feeling incredibly bonded with him, we both knew he was coming Almost Heaven Ranch. Everyone who saw this little guy, all 2 pounds of him, kept saying, “He’s such a cutie!”

Well, cue up the “Q” names, and he was dubbed QT. Actually, QT Pi (as in Cutie Pie). And now he’s our Granddaughter, Reagan’s, best friend — even above her other human family members! Seeing him be there for her as our Grand-Pug Bruce lost his battle with cancer just last month has only proved to me that one day Reagan will be telling her life story through the lives of her dogs, too.

So there you have my lifetime as reflected in the dogs I’ve been blessed to know, from my toddler days to some of the most wonderful and painful moments of my life. Who are the dogs who marked the milestones of your years?