Is your dog a rock chomper? - Dr. Marty Becker

Is your dog a rock chomper? 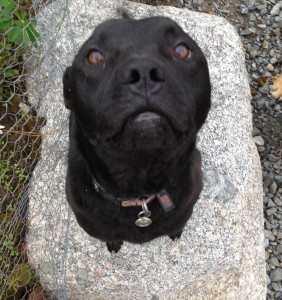 g has rocks in her stomach. Do you think they’re in her head too?

My beloved rescue dog, Gracie, is a spayed female Lab/Pit mix who was in a shelter from age four months to two and a half years. My “Gracie girl” will eat anything (all kinds of feces, including her own from time to time) and everything including Greenies, rawhide, sticks, freshly dug gophers, and grapefruit.

And, sadly, rocks, the stone-cold deli delight of hers that worries me the most.

Sometimes I’ll be working outside and will see her lying along the edge of the driveway picking up and swallowing irregular gray rocks ranging in size from a dime to a quarter. She doesn’t crunch them, just grabs and tosses ’em down the hatch. Working on the lawn or around the ranch, I can often tell where Gracie has defecated, because even if the dung beetles and or sprinklers have eliminated the feces, a little pile of gray rocks remains (like when a glacier recedes).

To figure out why Gracie, along with hundreds of other dogs I’ve seen as a veterinarian over the past 35 years, is a rock hound, I reached out to two top board certified veterinary behaviorists to dig for nuggets of explanation underlying this seemingly crazy act.

Dr. Waillani Sung, MS, PhD, DVM, DACVB, practices in the Seattle area with my daughter, trainer Mikkel Becker. Sung says that we really don’t know why dogs eat rocks. It’s thought the causes may include a mineral deficiency, internal parasites, inflammatory bowel disease, food allergies, some type of gastrointestinal discomfort, a displacement behavior, and, in some cases, a compulsive type of disorder.

Dr. Lisa Radosta, DVM, DACVB, says dogs may eat rocks because it somehow satiates them. She points out that Labs are predisposed to this behavior (Gracie is a Lab/Pit cross), and are probably the most common breed for exploratory laparotomies due to foreign body suspicion.

Dr. Rodasta explained that Gracie may have also been quite under-enriched in the shelter. The fact that her environment was under-enriched doesn’t change her need for activity and mental stimulation, so if what Gracie had to chew on as a puppy were rocks in the yard, that would be what she would gravitate to. Just like us, dogs are creatures of habit.

Drs. Sung and Rodasta give several tips for prevention of rock chewing or swallowing:

Remove access to the rocks – Our whole 140-acre ranch is full of rocks and Gracie has the run of the place. While we can’t pick up all the rocks, this would be possible in a much smaller space, or you can fence off an area that has rocks.

Give her something much better tasting than a rock – Teach a dog a behavior like “leave it,” which teaches her to move away from items. When you see that she’s about to chew on things you don’t approve of like rocks or rotten carcasses scavenged from the woods (which means you have to be with the dog), ask her to “leave it” and then reward her with something clearly better than a rock (such as the Beggin’ treats she loves)!

Get her hard things to chew – Make sure your dog regularly gets hard chews such as a “Busy Bone” to give a her super strong jaws and teeth a prolonged workout. Fill her life with safe things that fit her preferences.

Have her wear a basket muzzle – If you can’t supervise a dog all the time, you can always fit her with a basket muzzle with small enough openings to prevent her from accessing rocks or other dangerous items to swallow.

While part of me thinks of my blessed Gracie as a laudermutt, who uses her body to clean and dispose of piles of clean rocks, this behavior is always a risk because of damage or wear on the teeth and the possibility of a foreign body obstruction of the gut. Intestinal obstruction is sometimes fatal and almost always very expensive to trea

Do you have a rock hound? What do you do to protect him or her?

Photo: Gracie on a rock too big even for her to eat